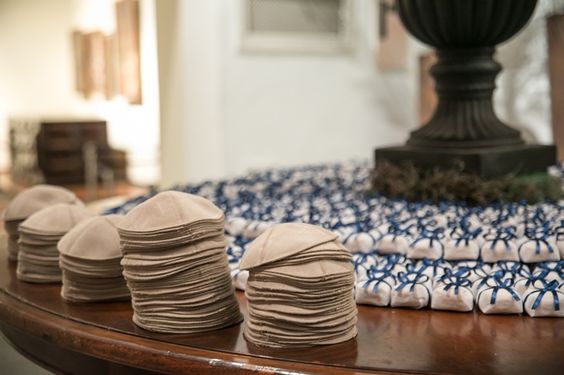 For the Jewish religion, marriage is considered to be one of the most sacred acts. Jewish traditions are filled with meanings for marriage. Rituals are thrilling, considered true metaphors that allude to the Old Testament of the Bible.

On the spiritual level, marriage is understood to mean that the husband and wife unite to form a single soul. That is why man is considered “incomplete” if he is not married, as his soul is only a part of a larger whole that continues to be unified.

According to some rabbinic traditions, God completely forgives any sin that the couple has committed in their lives, so that they can begin their married life in a totally pure state. 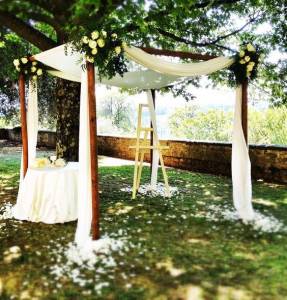 The bride and groom in the week before the wedding do not see each other and on the day of the ceremony they fast from sunrise until after the ceremony under the chupá, nuptial palace, eating their meal together at the end of it. Besides the fast, the bride and groom read psalms and pray for God’s forgiveness.

According to ancient tradition, before the wedding, the bride presents the bridegroom with a talit (wreath of prayers) and the groom presents it with a pair of candlesticks. The talit is worn throughout the ceremony, supported on the head with its ends relapsed by the shoulders and serves so that it remembers to be humble.

The bride’s dress should be white – the color of purity – since all sins are forgiven in the great day. The groom, on the other hand, wears the white kite over the suit, resembling a shroud. 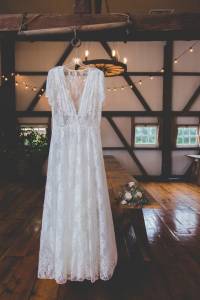 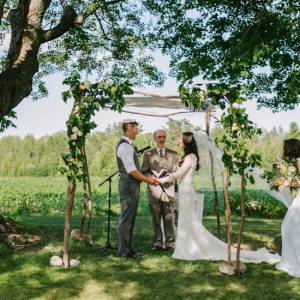 The chupá, preferably under open sky, is the place where the ceremony takes place. It is a type of tent that represents the new home that the bride and groom will build together, it is a protection that represents the infinite blessing of God and the conjugal harmony. The moment is celebrated by a rabbi, leader representative of the religion.

The parents accompany the bride and groom to the chupá, the groom is the first to arrive and await the bride.

An essential detail is the bride having her face covered by a veil on reaching the suck, after being delivered by her parents to the groom. This act symbolizes that the future husband values all the value that the woman will have in her life. But the Jewish tradition believes that, at the moment of marriage, the woman bears on her face the divine happiness that must be preserved. 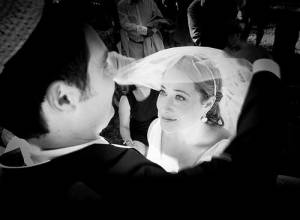 When the bride and her parents arrive at the sucker, they take seven turns around the groom. This is a custom spread only among Ashkenazi (Western) Jewish communities and symbolizes the seven days of creation.

The bride and groom should not carry anything in their pockets and should not wear jewelry during the ceremony in order to show their pure acceptance and devalue the material. Two glasses of wine are served to the newlyweds and both drink from the same cup, symbolizing total union.

The timing of the exchange of alliances is the highlight of the ceremony. alliances must be gold and smooth. The wedding ring should be placed in the strongest hand of the bride and represents an unconditional, perfect and unbreakable circle. From that moment, everything will be shared: life, the house, the goods, the dreams, the thoughts, everything …

At the end of the ceremony, comes the famous act of breaking the cup, which is done by the groom and means to keep the memory of the destruction of the temple of Jerusalem. Broken glass on the floor, meanwhile, means reconstruction in different phases, and the whole symbology is linked to the view of man’s mortality.

All the guests celebrate this moment saying “Mazal Tov”, which means “Good Luck” and ends with music.

During marriage, all men should wear the little white hat – symbolizing that God is above us, following all our actions.

It should be noted that Jewish rituals can have more than one meaning. In addition, we can observe marriages with different practices. Sephardic Jews (Spain and Arab countries) practice customs different from Ashkenazim Jews (France and Germany).

Music is selected with symbolism and blessing, as well as dancing and raising the bridegroom’s chairs high. The party is very lively, most of the guests are very happy with the union and show well what they are feeling. 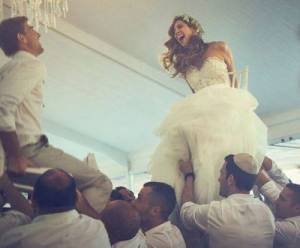 Getting Married Wedding Planner is waiting for you to organize your wedding according to your religion, custom and traditions.